A teenager finds a map leading to Dread Pirate Flint’s buried treasure, and is swept 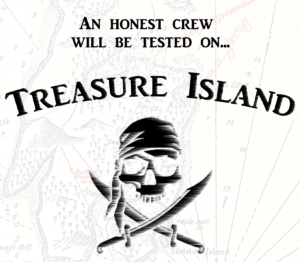 into an adventure on the high seas. Hawkins and his friends will have their courage tested against a band of deadly pirates who will stop at nothing to find Flint’s treasure.

Will young Hawkins do what is right? Even when the right thing is the hardest thing of all?  Sailing, swashbuckling, and swordplay abound in this coming-of-age tale of honesty and greed.   The voyage to Treasure Island is filled with adventure, intrigue, swordplay, and a few laughs along the way. 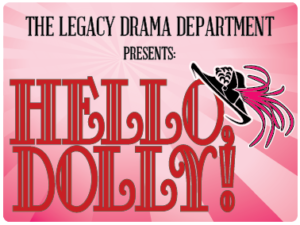 romance, high-energy dancing, & some of the greatest songs in musical theatre history. The romantic & comic exploits of Dolly Gallagher-Levi, turn of the century matchmaker, are certain to thrill & entertain audiences again & again.

“The Frog Prince” is a hilarious tale adapted from The 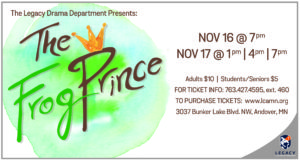 Brothers’ Grimm fairy tale called The King’s Daughter and the Enchanted Prince. It is about a princess who loves her golden ball. She meets a prince in the forest one day who is very arrogant and very self-absorbed. Because he is unkind, a hag turns him into a frog. The only way to free himself of his frog-ness is to be kind to the princess so that she will invite him back to her castle to be her companion for her birthday celebration.

The princess goes back to the forest and loses her golden ball. The Frog Prince ends up getting her golden ball back for her, and she reluctantly promises to let him join her birthday feast. Chaos and hilarity ensues when he shows up at the castle and his kindness shows that he is ready to become a prince again. But does he? Bring your family and friends for this wonderfully charming tale of how love prevails!

My Fair Lady is a classic and beautiful musical about transformation for the whole family.  Acclaimed 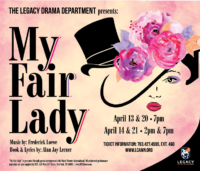 professor and confirmed bachelor Henry Higgins makes a wager with his linguistic colleague Colonel Pickering that in six months he can pass off a common flower girl, Eliza Doolittle, as a duchess at an embassy ball. After working day and night to speak “properly,” Eliza transforms into a proper lady. Along the way, she enthralls those around her including Freddy, a high-society gentleman who falls in love with her, and a linguistics expert who is convinced that she is royalty. When the six months are over, she is too refined to go back to her old way of life, but doesn’t desire the life of leisure either. A strong bond has developed between her and Henry Higgins, but it’s one that neither of them wants to admit.

Because it is known for being both clever and romantic, it is one of the most beloved musicals of all time.

The story of The Man Who Came to Dinner is set in a small town in Ohio in December of 1940. A famous, outlandish radio wit, lecturer, 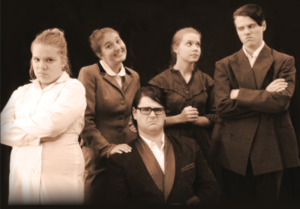 theater, and literary critic named Sheridan Whiteside (based on the real-life personality Alexander Wollcott who was one of the most famous people of the 1920’s-1940’s) has been invited to dine at the home of the wealthy owner of a factory, Mr. Ernest Stanley and his family. However, before Whiteside enters the house, he slips on a patch of ice outside the front door and injures his hip. Whiteside intimidates the Stanleys with threats of legal prosecution, and they are forced to allow him to stay while he recovers. Whiteside proceeds to terrorize the Stanleys, taking over their home and interfering with almost every aspect of their lives. But Whiteside’s life is about to change for the worse when his secretary of 10 years, Maggie, falls in love with the local newspaper editor and threatens to resign. Distraught, Whiteside plots to break up the happy couple. Maggie figures out his evil scheme and comes up with a plot of her own. Meanwhile, the Stanley’s normally beautiful home is full of chaos, which includes:  an octopus, 4 penguins, a roach city, and an endless stream of visitors that are very entertaining! The ending does not disappoint with a twist that will leave you surprised and laughing!

END_OF_DOCUMENT_TOKEN_TO_BE_REPLACED

Winner of over 100 international awards and seen by over 65 million people worldwide,Les Misérables is an epic and

In nineteenth century France, Jean Valjean is released from years of unjust imprisonment, but finds nothing in store for him but mistrust and mistreatment. He breaks his parole in hopes of starting a new life, initiating a lifelong struggle for redemption as he is relentlessly pursued by police inspector Javert, who refuses to believe Valjean can change his ways. Finally, during the Paris student uprising of 1832, Javert must confront his ideals after Valjean spares his life and saves that of the student revolutionary who has captured the heart of Valjean’s adopted daughter.

Epic, grand, and uplifting, Les Misérables School Edition packs an emotional wallop that has thrilled audiences all over the world. The sung-through piece overflows with melodies that are already standards. This author-approved edition has been abridged to a running time of just over two hours, while carefully maintaining the integrity of one of the greatest musicals ever written.

END_OF_DOCUMENT_TOKEN_TO_BE_REPLACED

Our LCA fall production 2016 was 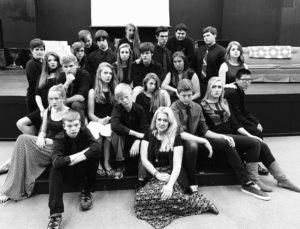 C. S. Lewis’ The Screwtape Letters, a Christian apologetic novel. With a cast and crew of 23, the stage version stays true to Lewis’ themes and purpose, but brings the action to life. Audiences were riveted as they watched the spiritual battle unfold onstage. This was one of Legacy’s most important productions!

While the novel is fictional in format, the plot and characters are used to address Christian theological issues, primarily those to do with temptation and resistance to it. First published in February 1942, the story takes the form of a series of letters from a senior Demon Screwtape to his nephew Wormwood, a Junior Tempter. The uncle’s mentorship pertains to the nephew’s responsibility in securing the damnation of a British man known only as “the Patient.” (Description source: Wikipedia)

END_OF_DOCUMENT_TOKEN_TO_BE_REPLACED

This stage production, based on the incredible true story of the von Trapp family, comes to life with the music of Rodgers and Hammerstein. It is the story of a widowed naval captain and his seven children, who suddenly find their world turned upside down by Maria, a postulant nun who is sent to work as their governess. With the nation in a coming turmoil preceding the horrors of World War II, the von Trapp family finds hope and redemption in their courageous stand for goodness and truth, along with the powers of love and the sound of music.

It has been 50 years since this timeless classic came to film, and it came to the Legacy Christian Academy stage in the Spring of 2016.

Produced with special arrangement through Rogers and Hammerstein Theatricals.

END_OF_DOCUMENT_TOKEN_TO_BE_REPLACED

The novel, one of the most famous works of world literature, was first published in 1847 under a pseudonym and is Emily Bronte’s only work. Wuthering Heights recounts the tale of ill-fated lovers on the lonely moors of northern England. Heathcliff and Catherine meet as children when Catherine’s father brings the abandoned boy home to live with them. The two grow up together, living freely on the moors while Catherine’s brother torments Heathcliff. When Catherine’s parents die, her brother turns Heathcliff out, forcing him to live among the servants. Catherine marries and the crushed Heathcliff disappears. Years later, a wealthy Heathcliff returns, but is it too late for them?

Our play version captures all the passion and revenge of this incredibly moving story. This is one of the most famous love stories ever told, and we know how to tell it.

END_OF_DOCUMENT_TOKEN_TO_BE_REPLACED

So how did I along with all the awesome actors and crew achieve success in spite of these difficulties? The answer: true love. A love for theater and performing, a love for a beautiful story full of God’s truth about forgiveness, a love and respect for each other, and most importantly a love for our God from whom all the blessings of this show flowed. That is what theater here at Legacy is all about … true love. As a result, over 1800 people were able to enjoy this production that was beautiful and timeless. As a result, all 6 shows were completely sold out with people waiting to see if tickets would be available. As a result, we were all moved and changed.

Thank you to our wonderful audiences. You have helped make our Theater Department a success. We look forward to seeing you at our future productions! (I’m hearing whispers of The Sound of Music in the Spring of 2016.)

END_OF_DOCUMENT_TOKEN_TO_BE_REPLACED

The Advanced Drama class will present a delicious and hilarious stage adaptation of Pride and Prejudice, Jane Austen’s classic novel about love, passion, and the perils of courtship. Directed by Kristy Winkes, Legacy’s Theater Instructor, this production fully captures the spirit of the beloved book and is pure delightful, romantic fun. It comically transports audiences to Jane Austen’s world of desperate spinsters, determined bachelors, nosy neighbors, embarrassing relatives, and even a charming cad or two.

One of Shakespeare’s finest and most produced plays, Hamlet weaves a tale of intrigue, mystery, and revenge. Hamlet, the prince of Denmark, comes home from abroad to find his father, the king, dead, and his mother remarried to his uncle. He immediately suspects foul play and with his friend Horatio, embarks on a quest to find the truth and avenge his father’s death. This story is one that transcends time and speaks to all of us with the all-important universal theme that pervades all of Shakespeare’s work – finding truth and light in a duplicitous, deceitful, dark world.

Much preparation and training went into preparing for this play. The cast received special stage combat training from one of the best fight choreographers in the Twin Cities; they have studied the difficult Shakespearean language and translated it into modern language for our modern audiences.

This play was not to be missed. It was truly a beautiful reflection of what a great, creative artist our Lord is.