Seussical takes us into the world of Dr. Seuss, where we revisit beloved characters including The Cat in the Hat and Horton the Elephant. The Cat 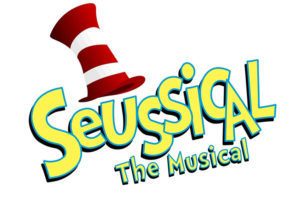 in the Hat guides us into The Jungle of Nool where  we meet Horton, a loyal and kind elephant. Horton discovers the small town of Whoville on a speck of dust where he meets a boy named JoJo. The Cat in the Hat continues to get JoJo in trouble by making him think too many “thinks.” Meanwhile, Horton courageously and loyally fights to protect the clover which Whoville has landed on, despite the outrage of the jungle animals and their efforts to throw him into the insane asylum for hearing noises from a dust speck.

Besides Gertrude McFuzz, who is desperately in love with Horton, no one believes Horton. Will Horton save Who? Will he convince the jungle creatures they exist? Will Jojo survive? Join us on this exciting journey of a loyal elephant, a bird with a one feather tail, a small boy with a large imagination, and a Cat in the Hat.

This production will take more than actors on the stage. There are plenty of roles to be filled such as backstage crew, tech (lights and sound board), costuming, makeup, hair and more!

If you would like to be involved in other areas offstage during the Spring Musical, please email Ms. Abby, letting her know what areas you are interested in exploring and any experience you may have. She would LOVE to have you!

Abigail Howse, a 2016 Legacy graduate, is excited to come back to Legacy Christian Academy as the Spring Drama Director. Graduating from the University of Minnesota in December of 2019, she will be working in Leadership Development. Theater played an important role during her time at Legacy and she is excited to invest in the program that made her time at Legacy especially sweet. Abigail’s love for theater has only grown during her 13 years of experience as an actress, and she is excited to take this step as Director. Starting at age 15, Abigail pursued training from professional actors and actresses in the areas of musical theater vocal training, acting and musical theater dance. She sees theater as a beautiful opportunity to reach others and share important morals through storytelling.