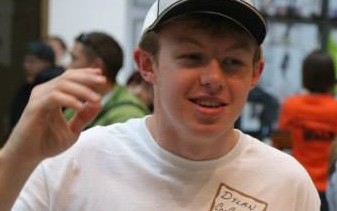 Dylan started a Walk for Hydrocephalus as part of his Junior Capstone Project at LCA and now co-chairs the Twin Cities Walk held at the Mall of America. The Hydrocephalus Walk raised $64,000 last year and is shooting for $74,000 when it is held on Sunday, September 18.

Dylan himself has Hydrocephalus, which is the buildup of too much cerebrospinal fluid in the brain. Normally, this fluid cushions your brain. When you have too much, though, it puts harmful pressure on your brain.

Hydrocephalus can permanently damage the brain, causing problems with physical and mental development. If untreated, it is usually fatal. With treatment, many people lead normal lives with few limitations. Treatment usually involves surgery to insert a shunt. A shunt is a flexible but sturdy plastic tube. The shunt moves the cerebrospinal fluid to another area of the body where it can be absorbed. Medicine and rehabilitation therapy can also help.

Dylan has undergone 5 brain surgeries in the past 6 months, the most recent on March 28 because he was having trouble with a shunt. He is recovering from a successful surgery.

Dylan is an avid hockey fan and he loves to play but could never play competitively due to his condition. He plays hockey with his friends and younger siblings all the time when he is not at college.

In recognition for his inspirational attitude toward Hydrocephalus, his dedication, hard work, time and energy he has devoted to the Hydrocephalus Association, the Los Angeles Kings hockey team acknowledged and thanked him by presenting him with a gift – an autographed Anzi Kopitar jersey like the ones the Kings players wore on their Hydrocephalus Awareness night.

Go to the Legacy Facebook page to read more, and to see the jersey presentation that was covered by Kare11 TV.