After every win this season, the Legacy Christian Academy boys’ basketball team has celebrated its win at Boston’s. After twenty of these trips, the boys are not done yet. The team now heads to the school’s first-ever boys’ basketball state tournament as the number one seed in the South region of the Class A tournament. They face the #4 seed Hayfield on March 31 at Rochester Mayo High School with tip-off at 4:30 pm.

Before the opening tipoff of the state tournament, the boys took time to think about the legacy that this team has established for the program. Harley Kendall, one of the seven seniors on the team, said that this is the “culmination of all of the team’s hard work.” Coach Nathan Bellefeuille agreed and noted “how committed each player is to the process of establishing our culture and getting better.”

Jake Wald echoed that sentiment when he said that this proves that “hard work pays off.” Wald knows the team has built a strong culture due to each player’s “investment and

dedication” while being serious but having fun and doing everything to build each other up. Those are the hallmarks of Coach Bellefeuille’s system, and the boys have established a culture rivaling any program in the state.

This team has shown the Legacy community the importance of never giving up. Each of these players believed they were a state tournament-caliber team last year, but they could not realize the dream last year due to Covid. After another year of development, they are back, deeper and scarier than last year. Kendall said that he hopes to show the next generation of Legacy basketball players to “work hard and never keep their head low.” Trent Harrison added that he wants people to recognize to “never push yourself so far that you don’t have fun.” This team always seems to enjoy the game of basketball, which is one of the primary reasons they are in the position that they are. The enjoyment for the game of basketball has allowed them to welcome its only new member of the team in the 2020- 21 school year, Micah Strand. The freshman said that he was initially worried about joining a team that had played together for so long but that he fit right in. Strand mentioned that Coach Bellefeuille is “the best coach in the state, and he plugged me in right away and made me feel welcome.”

Charlie Bovee, a junior on the team, focused on how this team has “set the bar for next year.” They are prepared to keep going, and no one expects this to be a one and done in the state tournament. Coach Bellefeuille knows that “the young guys see that it is possible to win and believe they can get there too.” Bellefeuille knows how much hard work it took this team to make it happen, though, and hopes the young guys recognize that as well. To advance this far, “it takes a committed group of players spending time in the gym and the weight room to be the best version of ourself” and that is something that the next group of Legacy players have taken notice of. The Head of School, Jake Mulvihill, says that “Because of who they are as men, and how they play, they have a solid group of passionate and talented basketball players wanting to follow their footsteps over the next few years” that will continue wherever this team leaves off.

Coach Bellefeuille has established a culture of winning and hard work at Legacy, which will help keep the train rolling even after the seven seniors graduate in May. When he took the job, the school was coming off a 2-24 season in 2017-18. Three years later, he has brought them to the state tournament. It’s a remarkable turnaround, and Mulvihill says that Bellefeuille uses the game of basketball to “disciple, transform, and train young men to love Christ and be prepared for their next stage in life. It is rare finding a coach that is so gifted at the X’s and O’s of basketball while caring deeply for the hearts and souls of his players.”

Assistant Coach Adam Hill talks about how the guys have an opportunity to “glorify Christ on a big stage” and to show the state why they play. They want to set a standard for excellence to win on the court and glorify Christ while they are doing it. They understand the intensity of this tournament, but they know that they are competing for something even more significant than a title.

The team cannot wait for the atmosphere and the memories that will come along with a state tournament run. With a potential of three more games on the schedule, the boys plan on taking three more trips to Boston’s to celebrate three victories to finish off the season and bring home the school’s first state basketball championship. 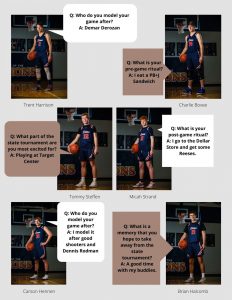